During the year, they are several months where regularly the number of viewers at the Yeshiva website increases significantly and Baruch Hashem we succeed to break the record time after time. The Jewish calendar gives the public many opportunities to stop the race of life, strengthen their foundations, deepen into Torah and Judaism, and flourish. 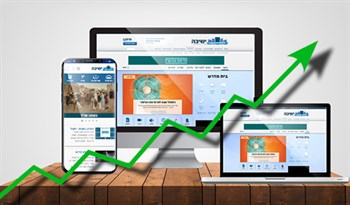 For example, during the previous month of Av, we had 587,821 different users. Obviously, the highest record was on the day of Tisha B'av, but the result of the whole month broke records.

To our surprise, the record from the month of Av has already been broken, and we did not assume it would happen so fast with such a great jump. In the final summary of the month of Tishrei, it turns out that during the month 695,594 different users entered the site!

Almost seven hundred thousand different users who used the Hebrew website, in addition to the tens of thousands who used the English website. Torah distribution of unprecedented scope.

This time, too, we checked the geographical location from which the surfers came. Of course the vast majority of the surfers were from Israel and  the United States, but further down the list are another 163 countries that surfed the Yeshiva Website, ranging from England, Ukraine, and France - to Turkmenistan, Malawi, Trinidad and Tobago, the Caribbean island state.

Recently, we brought a selection of special live broadcasts - a live broadcast from Mishmar Beit Harav Kook at Har Hazeitim, live broadcasts from events at Beit Harav Kook, remembrances made to Rina Shnerb HY"D, a Drasha for Shabbat Shuva by Rabbi Zalman Melamed, public Slichot in the Kotel, a night of learning throughout the whole night of Hoshana Rabba at Hadarom Yeshiva, Hallel at the south wall of Jerusalem and at Me'arat Hamachpela during Chol Hamo'ed and a large variety of Shi'urim.

All this is in addition to the thousands of subscribers who receive every day a daily Halacha and the users of the WhatsApp groups- ten groups of "Ask the Rabbi", an updates group, a Chizuk group and, and a Shabbat and holiday time's group.

We thank Hashem for the Zechut of taking part in spreading the Torah at such an extraordinary magnitude. We wish to continue to improve for Am Yisroel and for the Torah, because this is why we have Internet!


Tags: Yeshiva.co
More in This Category : The Yeshiva Website
More on This Topic
x
Desktop site - Switch to mobile site

Connecting To The Torah

Connecting to notifications from the Yeshiva Website in the browser, to always stay connected.
What will we send?